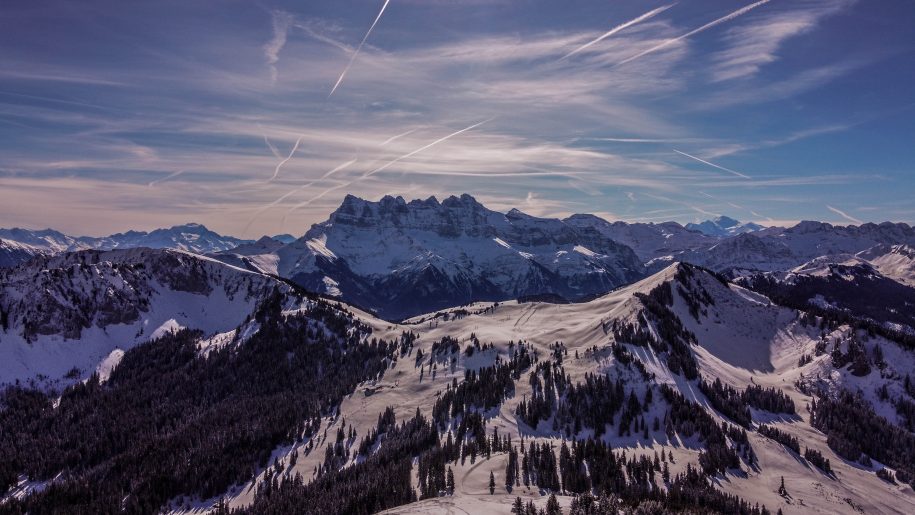 Posted by stayhide_admin on 18 November 2021 | Featured | No Comments

It is possible to visit all of the linked resorts in one day – which doesn’t include Pleney/Nyon/Les Gets or Grande Terche. It’s a pretty full day of riding and quite an impressive achievement. It involves crossing over the border into Switzerland and then crossing back over again. Set off early to make sure that you don’t get stranded over there!

There are a number of different ways to do the full Portes Du Soleil Circuit, and we will be looking at one of the more straightforward routes today.

To start your adventure, you need to get to Lindarets. It’s easy to get over there from Prodains, Ardent or Super Morzine. Neither one of them really has any advantage over the others, as long as you get yourself to Lindarets early to get things underway.

Head up the Chaux Fleurie chairlift. From here you need to cross the Plaine Dranse area to head towards Super Chatel. The lifts that you need to take to do this are the Chaux Des Rosses and the Combes chairs. The pistes are some of the best in the area – wide open, long and uncrowded. It’s possible to get down on either blue or red runs.

After the Combes chair you will find that you are close to Chatel. A few years ago a couple of new chair lifts were installed to make things much easier – it used to be the case that you had to head down to the bottom and wait for a bus to take you into Chatel. Now, however, if you head off to the right you come to the Gabelou chairlift, which takes you over toward Chatel. Then there’s one more chairlift right in front of you – the Portes Du Soleil chairlift – to take you up to Super Chatel.

Super Chatel is a great area to head to in its own right, with a fun little snowpark and quiet, sunny slopes. However, if you want to get the circuit done you won’t have time to fully explore it!

One problem with the links here is the fact that the next chairlift that you need to get is over on the other side of the main pistes and slightly higher than where you have come off the chairlift. Therefore you need to get the Coqs draglift to get the height you need to cross over to the Morclan chairlift, just below the top station of the Super Chatel bubble.

You are now in the Torgon ski area. You have also crossed over into Switzerland. The slopes over here are always quiet with plenty of untracked snow. There’s a lot of old school drag lifts over here, but nothing too difficult – at least, not yet.

Torgon offers some stunning views of the surrounding mountains as well as down to Lake Geneva.

From Torgon you need to head down toward Morgins. There’s plenty of signposts along the way so it’s easy to stay on track. The only problem that you’ll run into here is that the lift system is quite old and you need to use a number of very steep and aggressive drag lifts. Some of them catapult you up through the trees and you can find yourself wondering what will happen if you fall off and get lost in the forest!

When you’ve negotiated the last of the drag lifts, however, things get a lot better. It’s one run all the way down to Morgins. The snow at the bottom can be a bit patchy at times, but the run itself is good fun.

When you get down to Morgins, you’ll find yourself in a traditional, Swiss, Alpine village. Take a moment to enjoy the scenery as you walk across town. You’ll see a chairlift on the slopes across the village, and that is where you need to head.

From the top of this chair there are more amazing views to enjoy of the Dents Du Midi. When you’re ready to head off, go toward the Bochasses chairlift. From the top of there you will see a sign to Champoussin. This is the direction that you want to be heading in as you start to head home.

When you get down to Les Crosets, the easiest thing to do is to head up the Mossettes chair and ski back down to Lindarets. However, there are other options as well.

If you have the time then head up the Grand Conche chairlift which will lead you over toward the top of Fornet, above Avoriaz.

When you get to the top of Fornet, it’s easy to head back down to Avoriaz. From there you’re almost home, tired out and ready for a celebratory apres beer or two having completed the Portes Du Soleil circuit!